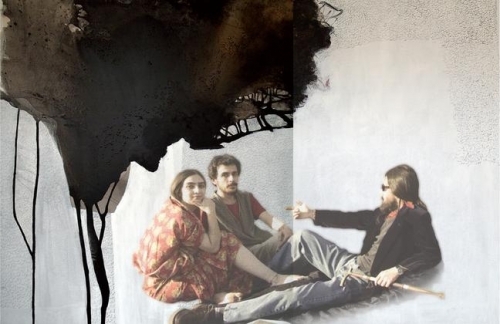 Warhol, Pollock, Rothko—you name it. A legendary exhibition draws from a collection worth $3 billion. Plus: the former empress of Iran reacts to the news.

It’s a collection that includes artworks by Andy Warhol, Claude Monet, Roy Lichtenstein, Jackson Pollock, Alberto Giacometti, Willem de Kooning, René Magritte, and many others. It has been valued at approximately $3 billion. And since the 1979 Islamic revolution in Iran most of it has been in storage. That’s about to change.

The Tehran Museum of Contemporary Art is set to put on a stunning exhibition filled with Western works acquired by Iran’s former Empress Farah Diba Pahlavi, many of which have not been so boldly displayed since she and her late husband, Mohammad Reza Shah Pahlavi, were deposed in the revolution that severed relations between Iran and much of the West. Under the empress’s direction, Iran purchased the works at a time when the global art market was depressed and Iran’s coffers were full of oil revenue.

“There’s been kind of a myth about this collection,” said the Fondazione Prada’s Germano Celant via phone from Milan. Celant co-curated the exhibition with the Iranian curator, architect, and filmmaker Faryar Javaherian. “Everybody was talking, and it disappeared after 1978 or 1979. There was a lot of work that I had only seen in pictures. It was this kind of secret, underground situation, where the work is so precious but has been in storage for so long.”

The exhibition, entitled “Farideh Lashai: Towards the Ineffable,” opens November 20 and marks the first time a non-Iranian curator of such stature has curated an exhibit at the museum since the revolution. Javaherian and Celant have created an anthology of works by the Iranian modernist Farideh Lashai, who became one of Iran’s leading artists of the era before dying in 2013 at age 68. The Western works are being presented as context for Lashai’s retrospective, and the Farideh Lashai Foundation was instrumental in putting on the exhibition.

It is difficult to consider the exhibition and not think of the broader warming of relations between Iran and the West. Buoyed by the Iran nuclear deal, the Iranian regime is tilting toward rapprochement with Europe and the United States, which is, in return, beginning the process of lifting debilitating sanctions.

“In general, it’s always culture and cultural exchange that come first, well before governments and people manage to move on,” said Edward Tyler Nahem, a New York gallerist and collector who has represented works by Lashai. “I think this is a lot bigger than we’re allowing ourselves to see, and whether it’s six months or six years hence, I think we will come to understand the impact that this exhibition will have had.”

Lashai’s work, which spans paintings, video, and poetry, is particularly suited to such a project, as she was inspired not only by the rich artistic history of Persian art, but also by Western artists of the modernist period.

“In my opinion, she has always been the most important Iranian-woman modern artist, and I’m glad that she’s getting the recognition she deserves,” said Leila Heller, a prominent Iranian-American gallerist and art dealer known for supporting artists from the region. Heller, who also represents some of Lashai’s works, points to a change in curators at the museum and the election of President Hassan Rouhani as the bloom of a new artistic moment within Iran.

Works by Pollock, Giacometti, Mark Rothko, Lichtenstein, Francis Bacon, and Warhol will surround Lashai’s art. Iranian artists are also represented, as works by Manoucher Yektai, Sohrab Sepehri, and Nasser Assar are included. “I want to force the audience to see the context,” Celant said. “There’s a self-portrait by Farideh, and there’s a self-portrait by Giacometti. We’re trying to say, O.K., the identity of the Iranian art is related to another identity in the world. That’s a dialogue that needs to be established, and that’s my function as a non-Iranian curator.”

Celant achieved such intercultural exchange by hanging works by Western artists on gray walls, often across the room from Lashai’s works, which are hung on white walls. But first, he had to dig into the collection itself.

“We went downstairs, and we started to get out all of the works,” Celant said of his first trip to Iran. “I was seeing that they were not in a bad state—not high tech, but well kept.” None of the work required restoration. Celant, a former senior curator at the Guggenheim, is no stranger to impressive collections. But even for a seasoned scholar of the arts, finally seeing the collection proved exhilarating.

The empress was also pleased to hear that the Western works would be on view. “I’m happy the collection is there, because in the beginning of what happened, I was very worried for these works,” she said in a recent phone conversation. She was especially concerned after what she termed an ill- conceived exchange in which the Iranian regime traded a de Kooning for a copy of the Shahnameh. “I once called the museum, many years ago, and I said, ‘I’m a student of art’—I wanted to talk to someone. They gave me someone, and I said, ‘Listen, this is a cultural heritage and wealth for our country. It’s also a material wealth. It’s for our people. Don’t exchange anything [from the collection].’” (The empress said it was not the only time she has called and anonymously suggested the regime’s artistic institutions change their ways.)

The art world has long been similarly concerned about the state of the collection. In 2012, a Jackson Pollock piece, Mural on Indian Red Ground, was seized by Iranian customs agents upon its return from Japan, where it had been on loan. “Can you believe it? A Jackson Pollock of that price in the basement of customs?” the empress said. “God knows with what. Fortunately, it came out.”

For the former queen, who recalled meeting Warhol, Marc Chagall, Henry Moore, Paul Jenkins, Salvador Dalí, and other artists, the exhibition is a positive development. “I’m happy that the Iranian people put this on exhibit because the Iranian people can see what they have,” she said. “I was very happy when an Iranian woman painter e-mailed me from inside Iran and told me that she had tears in her eyes when she was in front of a Rothko.”

It has been reported that museums in Washington, D.C., Berlin, and Frankfurt are eager to show parts of the collection. Celant said it remains unclear whether the exhibition he co-curated will be able to travel.

“The main problem is that to bring the collection is so expensive,” Celant said, citing potentially

insurmountable insurance costs. “It’s a difficult situation. Also, the museum will probably ask a reasonable fee to increase their situation. It’s normal—they know they have a big carrot. It could be that only Farideh’s [works] can travel.”

If the full show does make its way to, say, Paris, the pieces could be re-united with the woman who acquired them. “Of course, if the collection comes outside of Iran, I might go and see it,” the empress said.