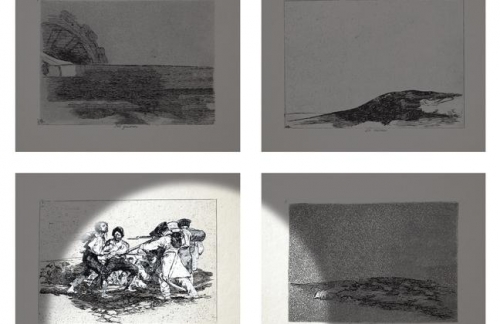 WELLESLEY, Mass. – On September 16, the Davis Museum at Wellesley College presents Farideh Lashai: Only a Shadow, an exhibition that centers around Farideh Lashai’s renowned 2012-13 multi-media installation, When I Count, There Are Only You...But When I Look, There Is Only a Shadow. For this series, Lashai meticulously recreated 80 of the 82 etchings from Francisco Goya’s famous Los Desastres de la Guerra (The Disasters of War) series (1810-20, published posthumously), which articulates the cruelties of warfare as both historically specific and timelessly universal. Five first edition imprints from among the 82 prints in Goya’s original series were recently acquired by the Davis, and will be on view in conjunction with Lashai’s work. Curated by Dr. Lisa Fischman, Ruth Gordon Shapiro ‘37 Director of the Davis Museum, Only a Shadow will be on view through December 13.

In Lashai’s interpretation of Los Desastres de la Guerra, the traces of Goya’s central characters and figures have been removed, leaving ghostly empty scenes. A video projection onto the framed prints takes the shape of a roving spotlight: alighting on each etching, it briefly animates Goya’s figures back into their original context. Figures make fleeting appearances across the frames and the static quality of Goya’s originals is transformed. The project’s art historical reference suggests the enduring relevance of Goya’s seminal works as a visual commentary on the violence and devastation wrought by war.

“It is fascinating to observe Lashai’s innovative use of new media in her sensitive and moving appropriation of one of Goya’s best known and most challenging masterpieces,” said Lisa Fischman, Ruth Gordon Shapiro ‘37 Director of the Davis, and curator of the exhibition. “With this exhibition we hope to bring attention to an artist critically lauded in Iran and less well- known in the U.S., and in doing so we are able to also highlight the important connection her work makes to the Davis collections, given our recent acquisition of the Goya prints.”

A celebrated Iranian painter, translator and novelist, Farideh Lashai (1944-2013) was one of the most active Iranian female visual artists known. Although she is distinguished for her abstract contemporary paintings, animations took her in a new direction later in life. Her art was featured in 25 solo exhibitions and more than 80 group exhibitions including the 2012 Sydney Biennial and the 2014 Moscow Biennial.

The exhibition will be on view in an adjacent gallery to a concurrent exhibition at the Davis Museum, The Krieg Cycle: Käthe Kollwitz and World War I, a study of Käthe Kollwitz’s groundbreaking print series, Krieg (War) that includes seven woodcuts from the series displayed alongside supporting lithographs, sculpture, and rare preparatory drawings and trial proofs. During an initial meeting with the artist’s daughter, Maneli Keykavoussi, head of the Farideh Lashai Foundation which represents the artist’s estate, Fischman learned that Käthe Kollwitz was one of Lashai’s favorite artists—and a lifelong influence on her practice— creating another extraordinary resonance across time and geographical distance through art.